Miniatures and board games

I don't hate miniatures. I bought several 3D printers to be able to create miniatures myself for my D&D games, before COVID made real worlds games difficult and we moved to Roll20. So I have printed many an orc, and found that a 3D-printed miniature in a single color was in many ways superior to a flat 2D color token on my gaming table. Having said that, I am starting to hate miniatures in board games. To explain why, let's have a look at an unboxing photo of Kingdom Death: Monsters. 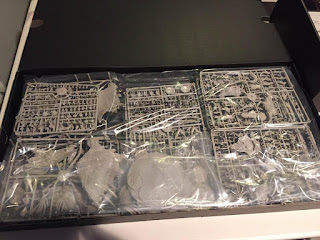 What do you see? A lot of plastic parts that aren't assembled. That has 3 consequences: 1) Kingdom Death: Monsters costs about $400 for just the core box; 2) If you can't assemble small fiddly plastic pieces into actual miniatures, you can't play; and 3) unless you can also paint miniatures, the final result doesn't actually look much better than 3D-printed miniatures in a single color. Now different games have these 3 problems in different degrees. Some come with the miniatures already assembled. Some even come with them already painted, but of course that is then more expensive.
The overall result is that there are some board games where I would play them if they came with cardboard standees instead of miniatures. But it is the miniatures, and only the miniatures, which prevent me from buying the game. I find the settlement survival gameplay idea of Kingdom Death: Monster quite interesting (if a bit harsh), but I am sure not going to spend a fortune on something that would take me hours of unpleasant work to assemble. Of course, some people assemble and paint plastic models for fun; but it sure isn't for everybody. Even if 13 people went for the $2,500 all-in pledge at the latest Kickstarter for the game. Me, I'll be waiting for the $100 cardboard standee version, that will never come.

Comments:
This is an area in which I have very limited experience but I have noticed that collecting and painting miniatures is a major feature of a lot of table top games. Table top war gamers for example seem to spend more time painting their armies than actually playing them. I totally get that and I can imagine that there is tremendous creative satisfaction to be had from hand crafting your troops. However I also wonder if the underlying games are really any good or is game play just a flimsy excuse for the real crafting hobby.

In New World, if players buy Amazon New World Coins, they are completely crazy. That development team doesn't deserve a single cent. It's embarrassing how they managed to screw almost everything in that game. What a shame.

My apologies to Rugus, but I deleted the spam comment from jasmyn peddling Amazon New World Coins in spite of his answer to that comment.