Steam sent me a review of my year on that platform. I don't know what the cutoff date for that was, but I did play Against the Storm and Baldur's Gate 3 this month on Steam, and they aren't listed. Also, there seem to be a few mistakes, like Wartales being listed as "First played in 2022", when I already blogged about it in 2021, and got far more hours in it played than the last place in that list suggests. 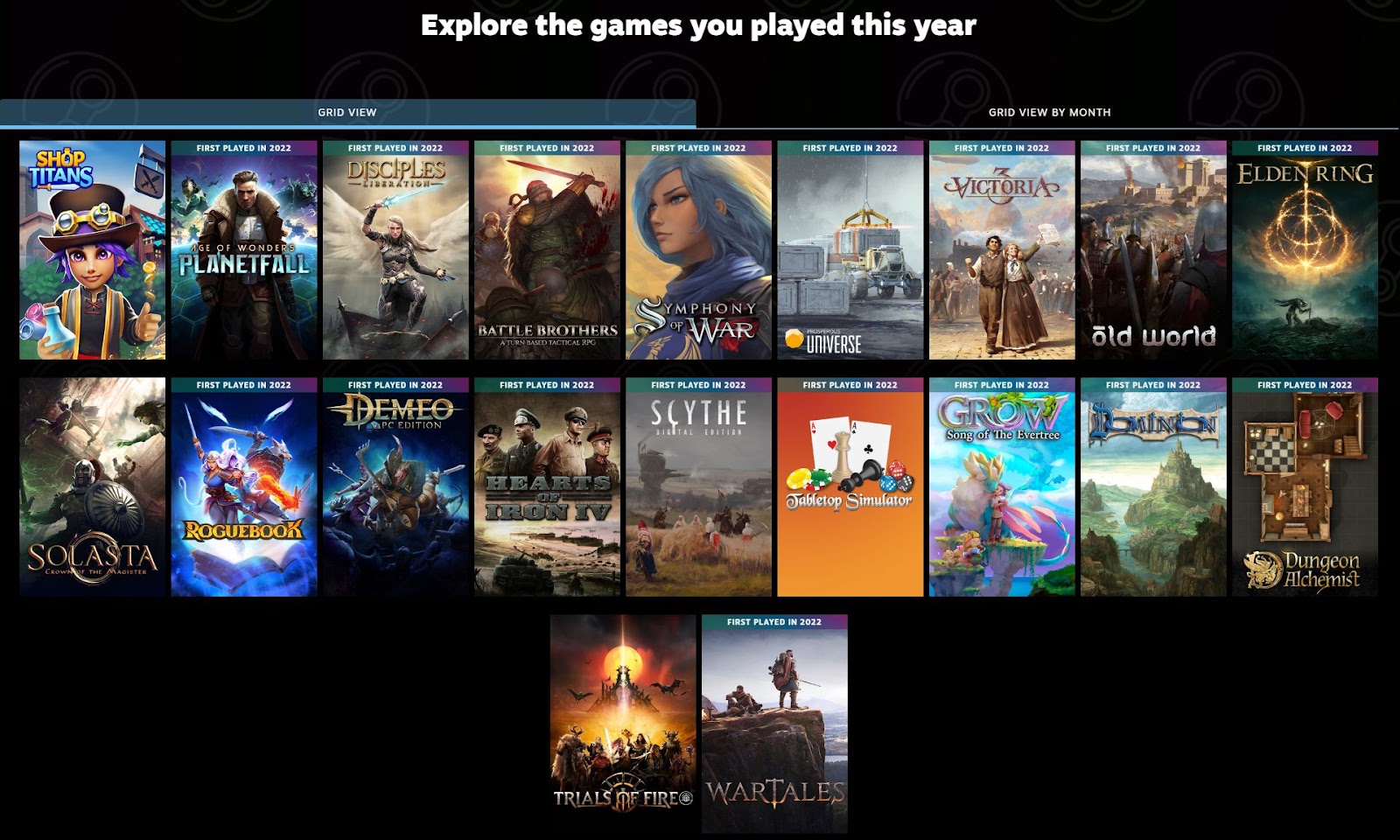 I was also a bit surprised by the comparison between me and the average Steam user:

I unlocked 14 times more achievements than the average player? Wow, I must be a hardcore power gamer! But the biggest shortcoming is that Steam can only count the games I played on Steam. I mentioned in a comment on the previous post that I played 20 hours of Timberborn this year, but that was on Epic. And there were a number more of games either on Epic or on Xbox Game Pass for PC that I played, which Steam couldn't count. Not to mention my Nintendo Switch and my iPad. So the review of a single platform is kinda cute, but very incomplete to paint a full picture of my gaming habits.
- posted by Tobold @ 4:43 PM Permanent Link

Comments:
FAQ at the bottom says:

What dates of playtime are included?
Steam Replay 2022 includes all of your play time between the first second of January 1 and the last second of December 14 (GMT).

For me, 99% of my gaming is on the PC through Steam, so this is a very accurate reflection of my habits. Although for the effort they've put into it, there's nothing exactly surprising in it. I'm well aware of what I played in the past year and roughly how much. The spider graph of genres is perhaps the most interesting thing there.

Yeah I noticed some oddities as well, in terms of average vs. what I put in. I enjoyed that it said I had played 248 games this year, though 90% of those were me firing up and testing out different games on the Steam Deck for a few minutes. The thing I found interesting was the graph that showed play time by month....I had three months last year where my game time went through the roof, and correlated well with when I knew I had also played games on other platforms (I spent an equal amount of time on PS5 and Switch, for example, that I do on Steam). The net take away was that apparently I have a lot more game time/interest in February, August and October for some reason. If that turns in to a pattern over time I'll have to see if I can identify why those months are the Big Gaming months.

I think that's a bit like my end of year Reddit review. I post on there a couple of times a week, most comments only get a few upvotes, and yet I was in the top 3% of users apparently. I think we over-estimate how much people actually engage and play stuff.