These are the XVM stats of a rather mediocre player of World of Tanks: He has played a good number of battles, but his win rate is at best average (due to draws the average in World of Tanks is 49%, not 50%). The WN8 score, which is supposedly representing this player's skill is in the "orange" color category below 1,000, just one step up from the bad players "red". You wouldn't be happy seeing this player in your team.

Now this player is rather decent. It is clearly a reroll account, as nobody gets this good with just 100 battles played. The 56% win rate is rather good ("green" color), and the 1321 WN8 is decent enough at a solid "yellow" level. You'd be okay seeing this player on your team.
Of course, you guessed it, both of these stats are mine, my main account and a reroll account. As I said in a previous post, trying to optimize the Battle Pass event in World of Tanks has steered me towards the tier and type of tank I feel most comfortable with, and I have the most fun with: Tier 6 medium tanks. At this tier I find World of Tanks challenging, but not frustratingly so, and I manage sometime to have a real impact on the game. So after playing mostly at that level for some months, I noticed that my stats in term of win rate and WN8 were going up constantly, but slowly. 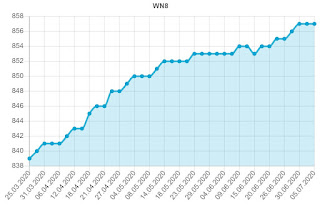 Of course I wondered what my actual "current" stats are, that is to say what my stats would be if they weren't bogged down with 15k battles with lower stats. So I created a new account, spent a bit of money to buy two tier 6 medium premium tanks, got two more tier 6 regular tanks from the same two nations (as then you can use the same crew), and played the 100 battles XVM requires to calculate stats. So the good news is that I am playing better than the stats of my main account would suggest. The bad news is that it is nearly impossible to improve the stats of my main account, because the stats displayed are the average of everything, not "the last X battles". If I had played those 100 battles with an average WN8 of 1321 on my main account, my WN8 would have gone up only from 857 to 860. I would need to play 7,000 battles on my main account at this level to just increase the stats to the "yellow" level of a bit over 1,000. That is more battles than I usually play in a year.
While that reroll account was useful for determining my current level of skill (in as far as you believe that stats can represent level of skill), I certainly wouldn't want to permanently switch accounts just for better stats. There are lots of players who do, but on my main account there are 190 tanks, and I have unlocked more than that on the tech tree (I just didn't keep them all). Besides the tanks, the main account also has a nice selection of good tank crews, lots of equipment, and various other goodies that one tends to accumulate over the years. Those things are more important to me than stats, I look at my stats only out of curiosity. Still, I bet that if WoT allowed players for a 50 € "fee" to reset their stats while keeping everything else, they would make millions.
Having your stats go back to the day you started is really counterproductive to the idea that your stats somehow measure your skill. It is as if a "gear score" in World of Warcraft would represent any single piece of gear your character ever wore, instead of the current set. I understand why they keep the whole set of stats, so people can look at for example how often they drove one particular tank. But the third party organizations like XVM that calculate WN8 would probably get a more accurate picture if they could just look at the stats of the last 1,000 battles of a player.

Comments:
The third party stats site for World of Tanks Blitz, BlitzStars, does a nice job of balancing recent and historical data. You can see at https://www.blitzstars.com/player/com/klievhelm that I'm not playing as well or as much as I used to. The last 30 days is given clear priority in the display, which is appropriate. Like you say, I think that would be a sensible default for XVM as well. Blitz still gets rerolls, but it always seemed silly to me, even when I was improving and felt the weight of past battles.

On the other hand, by creating your new account, to remove the historic bias, you are also 'cheating' : if this technic - rerolling a new account - is not frequent, it means that most 'green' player have achieved their score with the same historic bias that you see on your main account. If they reroll, their score would be even higher.
But I fully agree with you : only keeping the last xxx hundred battle would remove this bias, and make the score more reactive to current performance. It is even more important, as the player base is ageing and become better with time. The average performance is moving with time, making it harder to achieve the later you join the game.
As a very casual and not so good player ( firmly in the red zone), I would love to have a matchmaking based on performance, to help making the matches more interesting for everyone. My current zone of comfort is Tank lvl 2 & 3, where I feel I can make a difference.

Well, your stats currently have absolutely no influence on the game. Making yourself look better with a reroll account is purely for yourself and some imaginary gamer status. At least Wargaming doesn’t consider using multiple accounts as cheating, they actually support it with a functionality in their game launcher that lets you switch accounts faster.