Prediction of time to 70

Taking the data from Playon, it is relatively easy to extrapolate the time needed to level 70, with the big caveat that this presumes that the leveling curve remains the same. We just plot all the data points of the measured accumulated time to level from 1 to 60, and do a power law regression of order 2 through the points. Checking whether this is reasonable is done by calculating the R² factor, the closer to 1 the better, which in this case gives us an excellent 0.9995. 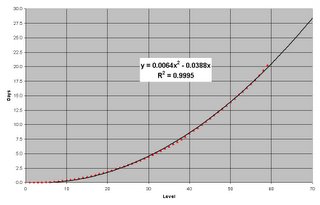 As always in statistics, extrapolation is dangerous. And in any case there will be a wide variation between the most hardcore players and the most casual players, the data on which the calculation is based is just an average. I wouldn't be terribly surprised if the first person to hit level 70 does so only one week after the expansion comes out.

But for the average casual player the interesting point is that by adding 10 levels from 60 to 70, you don't add 1/6th or 17% to the game, you add a full 40%. If it took you 5 months of casual gaming to reach level 60, the expansion will add another 2 months of content to the game. Now that would be an advertising slogan to print on the expansion box:

Slight problem with your graph ... in the 30-40 region the line is consistently slightly above the actually data points. 40 through 58 it's a reasonable match. Data points 59 and 60 are above the line.

Suggests your line isn't as good a fit as it could be, and also suggests that the line could be a lot steeper beyond 60 than graphed.

Maybe graph it again, ignoring the pre-30 data as it looks to me like there's a slight switch in the best-fit at around 30 (corresponds to my own experience when I was playing - it was 30-35 where I started to feel the grind first and I quit before I reached 45).

Also ... while R^2 is very good, it is possible to fit a line that bears very little resemblance to the actual data and still get a good R^2 value. A good statistician will use more accuracy measures than just the R^2 (such as eyeballing the fit as I did, for a start).

I think 60 to 70 is too shallow. I'm no mathemetician, but it looks like the numbers are trending up much faster than they are. I imagine someone could write a logarithmic formula to continue the progression, but I'm not so smart. I just use a graphics program :)

Of course, you're right in that this assumes the projections come off that trend at all and it's not just a flat increase.

I just hope there's no grinding. I'm definitely back in WoW for the expansion, but I'm not going to reroll to do the whole game over again, so it's 60-70 and new quest groups or bust.

As I said, extrapolation is always dangerous. Leveling speed depends on so many things, like your meta-level, the quests that are available, and your dedication. And in this case you never know in how far the developers changed the design of the leveling experience.

But in general an estimation of the expansion adding 40% of play time to the game sounds reasonable to me. Sure, it might be 50% instead, but not much more, because then people would start complaining that leveling was too slow. Nobody wants "hell levels" as in Everquest.