Dragon of Icespire Peak - Sessions 3 and 4


I reported the first two sessions of this campaign in a previous thread. That ended with me looking for a better adventure hook. I did find a good one, but I admit that it isn't terribly original. I did a small encounter which is normally part of the Logger's Camp quest, but which I had skipped: Meeting one of those half-orc druids in boar form in the forest. And when the group killed him, they found a letter on the corpse explaining that the worshippers of Talos were looking for a powerful magic item, a staff of thunder and lightning. However that staff had been broken up into three pieces and those three pieces were in the three places that I wanted my group to go to. Simple, but very persuasive.

So in sessions 3 and 4 they did most of those three quests: The Shrine of Savras, Mountain Toe's Gold Mine, and Axeholm. They had been warned that there was an army of orcs at the Shrine of Savras. That turned out to be 21 orcs and 3 ogres, which is quite a lot for a group of level 4 characters. Especially since according to the adventure they all were in the courtyard, and there was no obvious way to isolate them in small groups. Furthermore one of the orcs was on a watchtower, with no easy way to approach without being seen. The group managed this challenge by sneaking up to the tower at night, because darkvision is only 60 feet. They managed to get up the tower and kill the orc, but that alerted the rest of the orcs and ogres. For the rest of the battle the heroes held the top of the tower against the orcs that broke through the trapdoor from below or were given a leg up by the ogres. At one point the battle looked like this on Roll20: 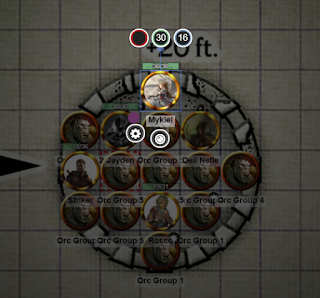 Note that this is in the dark, with everybody having darkvision, which is why the colors aren't brighter. I had sorted the orcs into 5 groups of 4 orcs each for purposes of initiative; otherwise you end up having 20 orcs acting at the same time, or need to deal with 20 individual initiatives. I decided that the ogres couldn't get up the tower, so once they had helped the orcs up, they retreated into the shrine. The group managed to kill all the orcs, and then hunted down the ogres. They found the first piece of the staff and the hidden gold treasure.

As the gold they had found was very heavy, they then returned to Phandalin to exchange it for lighter gems at the Phandalin Miner's Exchange. They also bought everything they needed, and to my surprise even checked the job board. So I gave them the job board quest that led to the same location as the letter said the second part of the staff was, Mountain Toe's Gold Mine. However the mine had been overrun by wererats, which were immune to damage from weapons that weren't silver or magical. I had made sure that all the characters had some magic or silver weapon, but that didn't mean they could do all of their attacks: The monk had a dagger +1, but his bonus karate chops weren't doing any damage; the fighter had a rapier +1, but was normally a crossbow specialist with crossbow expert and sharpshooter feats, but without any magic or silver crossbow bolts. In addition I staged the main encounter in the mine with the wererats in giant rat form among regular giant rats, and had set it up in Roll20 in a way that the two were indistinguishable by the players until they attacked. The mine was also full of narrow tunnels, and a part of the monsters was able to circle around and attack the group from the back. Another quite interesting fight, but the heroes prevailed and found the second part of the staff. They also reached level 5, which is a huge increase in power in the somewhat uneven power curve of 5th edition Dungeons & Dragons.

Now I did try and push the group to do some knowledge checks, for example to know more about Axeholm. But intelligence is often a dump stat in 5th edition Dungeons & Dragons, and so the group went there with no more information than the name and location of the place. They missed out on the backstory how an evil elf ambassador had been caught causing mischief in the dwarven fortress of Axeholm, been killed, transformed into a banshee, and forced most of the dwarves to flee, while others had been transformed into ghouls. I let the banshee appear early, do its wail, and then flee (which is easy, because the banshee can fly and move through walls), while the group was attacked by ghouls. The wail knocked two characters to 0 hitpoints, which made the group respect the banshee. They cleaned out the lower part of the fortress, except for the throne room (where ironically the third part of the staff is hidden). They then went up and fought a bunch of giant spiders, but that section was a dead end. But then they found other stairs to the second upstairs part. There they met some ghouls, and as they started to fight those, the banshee appeared as well.

Now there are two types of dungeon masters: Those who fudge dice to influence events, and those who roll in the open and learn to react to the randomness that brings. I am firmly in the latter camp, and do all the rolls in Roll20 in the open. In this case that ended up with a somewhat interesting result, as both the ghouls and the banshee rolled a natural 20 on their initiative. The ghouls surrounded the group, and the banshee used her horrifying visage ability to frighten them, with 3 players failing their saving throw. That made the fight a lot tougher, but also more interesting. We ended the session after the fight, because it was getting late, and in Roll20 it is relatively easy to continue playing at the same spot where you stopped.

Overall I was quite proud of the two sessions. I certainly am not a Matt Mercer, I can't do voice acting; and because I am doing my roleplaying in French, which is my third language, I sure ain't the best at describing scenes. But 40 years of playing and DMing D&D, and especially the years of 4th edition D&D tactical gameplay have taught me a lot about how to stage epic fights. In each of the three locations I had at least one epic, nailbiting combat experience for my players, which they enjoyed a lot. And now I have another good fight planned for the final scene of Axeholm, by upgrading the undead dwarf castellan who guards the third part of the staff from a ghoul to something considerably more dangerous. I also have to say that for our play style, with both the DM and the group liking tactical combat rather than doing a lot of in-character voice acting, role-playing and theater of the mind stuff, Roll20 is a very good platform. It is especially good if you buy pre-made adventures, and you can cut down significantly on the preparation time, because all the tokens and battle maps are already there. Between that and the lockdown we managed to go from a session every two weeks to up to two sessions per week. Lots of fun!

Comments:
How do your players heal each other during these sessions? Especially that section with the banshee- did you let them retreat and take a rest after the first attack, do they stock up on scores of healing potions, or do they creep around with the single-digit hit points that they obtained from a healing word and hope they don't get hit again for the remainder of the session? That would certainly be nail-biting.

I gave my druid a staff of healing, because I didn't want him to use all his spell slots for healing only, which is a bit boring. But I also have a paladin in the group, who can do a bit of healing and laying on hands as well.