Dungeon of the Mad Mage - The Gameshow


On the narrative side Dungeon of the Mad Mage, like all mega-dungeons, has a problem: Why would anyone go through all the effort of building a 23-level dungeon with a thousand rooms, and keep restocking it after adventurers killed some of the denizens? So I am following a suggestion from the Dungeon of the Mad Mage Companion, and am running the whole thing as a derange gameshow. A bit like Borderlands 3 setting up the archvillains as social media influencers, the concept gives the main villain more opportunity for exposure. So Halaster Blackcloak is not waiting silently at the bottom level of the mega-dungeon, but appears at various occasions as the gameshow host, making snarky comments on the performance of the group. That gives great motivation to go and kill him, and provides opportunity to give the players some information they wouldn't otherwise have had.

I went and took images from an old TV show called Knightmare to create an encounter (room 27 on level 1) where the group sees a "wall of rectangular crystal balls" showing a younger Halaster commenting on previous "contestants". 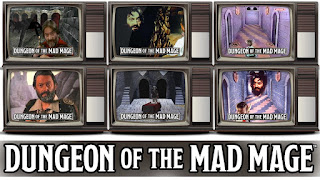 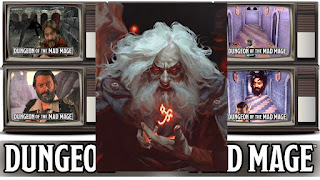 Already when they entered the dungeon for the first time, I had Roll20 set up to play a gameshow theme music. At the start of session 2, Halaster appeared as a voice from the off with comments on the "previous episode", session 1. He invited the spectators to watch and find out whether somebody from the group would attune to the evil magic heart they had found at the end of the first episode. When the group got stuck with a puzzle on the gate in level 2 and wanted to walk away, he mocked them and gave a hint that told them that they could solve it without having to search for a key elsewhere.

Of course the gameshow concept is a deliberate anachronism and many aspect very much meta gaming. But in this context this works very well: The players understand the motivation of Halaster from their experience with the real world, while to their characters Halaster appears to be incomprehensible and completely mad. I didn't have to change much in the actual dungeon, just add some minor fluff like the manticore on level 1 asking a quiz question (again using Roll20 sounds to add a ticking clock and buzzer) and attacking after them giving a wrong answer. Which is obviously more interesting than a room with a manticore that just attacks on sight.

In a way, I, as the DM, am Halaster. Our motivations coincide to some agree. While Halaster is pushing the group towards bad decisions with his comments, I as the DM push the group to actually make those decisions instead of endlessly postponing them. With a thousand rooms in the dungeon, the players constantly come across things that *don't* mean anything, which teaches them to just ignore all sorts of stuff. That has the danger of them ignoring the actually interesting stuff as well, so "Halaster" steps in to make sure they don't.

This certainly worked in session 2, a 7-hour session we played yesterday. After Halaster asking whether a player would attune to the evil magic heart that they had detected a strong necromantic aura, one player actually did. And instantly died, so they had to leave the dungeon and get him resurrected. After Halaster encouraged them to solve the riddle that would open the gate in level 2, they did, and without resting or further preparation went through the gate. That landed them in level 4, designed for characters 2 levels higher than they are currently, and right into a fight with a group of drow. Instead of fleeing, they wanted to kill those drow, which nearly led to a total party kill. In the end a drow mage fled to call reinforcements, and the group fled before those arrived.

I don't really want to kill off my whole group. But Dungeons & Dragons is a better game if the players at least think that they could die any time. The 5E death save system makes it actually rather unlikely for a character to die, and there is always the possibility of resurrection. So it was good to establish in the story with the evil magic heart that if players act in a way that blatantly ignores obvious warning signs, instant death is part of the game. And the story with the gate showed them that the dungeon gets a lot more dangerous further down, and they don't win every fight easily like on level 1 (which is designed for level 5 characters, while the group is level 6).

The session also established an important principle for mega-dungeons: Choose the dungeon level wisely, as a function of your strength. In the first session they were proceeding through level 1 in a completionist fashion, as if they wanted to explore every single room of every level of the dungeon. That isn't necessarily a good idea in a mega-dungeon. It just takes too damn long, and if the level is too easy, it isn't really interesting, nor rewarding enough. Now they skipped part of level 1, and started level 2, which is where we will continue in the next session.

Comments:
If they stay too long on an easy level, Halobold could always open a trapdoor under them and drop them to the next...

I LOVE that idea! I linked quests from their characters background to "The Lost Mine of Phandelver" into "Dungeon of the Mad Mage" so my players had reasons to go there, but your idea is just awesome! Halaster could appear as an "hologram" in the Yawning Portal and mock the patrons or comment on the contestants...

It just open up SO MANY possibilities.

I now have to find a way to fit this into my game. My setting is more like Eberron than Forgotten Realms so it should look even less out of place.

Level 2 has a lot of interesting opportunities for them- you should all enjoy it.